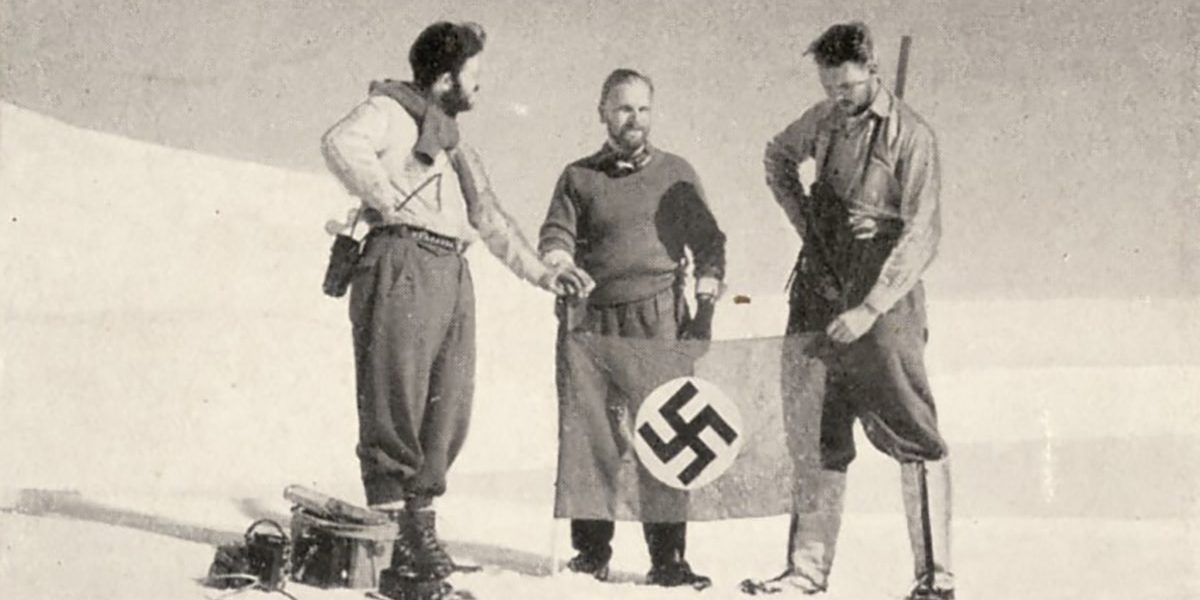 As many other countries, Germany sent expeditions to the Antarctic region in the late 19th and early 20th centuries, most of which were scientific. The late 19th century expeditions to the Southern Ocean, South Georgia, the Kerguelen Islands, and the Crozet Islands were astronomical, meteorological, and hydrological, mostly in close collaboration with scientific teams from other countries. As the 19th century ended, Germany began to focus on Antarctica with the New Swabia Expedition.

On 17 December 1938, the New Swabia Expedition left Hamburg for Antarctica aboard MS Schwabenland. The expedition was organized by Alfred Ritscher, a decorated World War I naval commander. The secret expedition had 33 members plus Schwabenland’s crew of 24. On 19 January 1939, the ship arrived at the Princess Martha Coast, in an area which had lately been claimed by Norway as Queen Maud Land, and began surveying the region.

Nazi German flags were placed on the sea ice along the coast. Naming the area Neu-Schwabenland after the ship, the expedition established a temporary base and in the following weeks teams walked along the coast recording claim reservations on hills and other significant landmarks.

Photographic survey flights were made by the ship s two Dornier-Wal seaplanes which altogether flew over hundreds of thousands of square kilometres and took more than 16,000 aerial photographs. Previously unknown ice-free mountain ranges, several small ice-free lakes were discovered in the hinterland. The ice-free Schirmacher Oasis, which now hosts the Maitri and Novolazarevskaya research stations, was spotted from the air by Richard Schirmacher (who named it after himself).

On its return trip to Germany the expedition made oceanographic studies near Bouvet Island and investigated Trinidade Island off the coast of Brazil, arriving back in Hamburg on 11 April 1939.

In 1952, the government of the new Federal Republic of Germany exercised its right, based on the Nazi exploration, to name geographical features in the area.The German polar research station ‘Georg von Neumayer’ is located in what was formerly known as Neuschwabenland. As the area was first explored by a German expedition, the name New Swabia and German names given to its geographic features are still used on many maps.